Donald Trump and Mike Pence are relaxing on the roof of the white house.

When suddenly Trump has a briljant idea.

"Hey Mike", Trump says puffing away on a blunt, "you know what would be great?"

"If the NSA would issue you a shadowban on the entire internet?" Pence replies while sipping from his bottle of made-with-real cocaine Coca-Cola.

"Yeah yeah, smartass I am not talking politics right now. We should have some fun, that would be great."

"My ears are yours."

"What do you have in mind ... oh president my president."

"Don't call me that, you know I hate that term, brrrrrr work. No! Listen up. See I was just smelling my euh reefer here ..."

"Yeah they say he trained him to bring him the football and type in the first four numbers just to see Hillary go bonkers so he could have some .. alone time .. if you know what I mean."

"Jesus Christ what was wrong with that guy?"

"Well it's been 16 years now and we will have the joint strike fighter program produce a flying plane before somebody in the whitehouse strikes the last of his left over stash of joints."

"It's pretty great stuff, hahahaha ... just a little stronger and the Oslo accords might have produced lasting peace!"

"No pency, hihi pencie pencie. No I was talking about a skunk!"

"I mean the animal."

"We should totally see who is brave enough to hang out with a skunk!"

" I am your president, I can command you to"

"I don't like to be commanded, you know that. Fuck you Donald, fuck you!"

**" Alright, alright .. you know I can't resist my donald, the greatest presi...

"Yeah yeah, save the gerrywankering for later. Here give me your phone and let me give that secret service guy Steve a call, he knows somebody that works at the Smithsonian Zoo"

"Alright mikey boy, here is the deal. In that bathroom is a skunk. As soon as you go in, I start this timer. And when you can't take it anymore and come out I will stop the timer. And then I go in and we will see who is brave and who is a pwoook pwoook pwoook chicken. hehe"

Mike Pence takes a final breath and storm in to the bathroom.

Three minu .... the door opens and Mike Pence stumbles through it and vomits all over the place.

"Only two minutes, look I have the time here ... see? Now it is my turn. Take my Rolex and please Mike ... don't vomit on it. Or I will tell Karen"

Trump takes a deep breath and opens the door.

A guy rented a hot air balloon, to take his friend with him on a long ride going nowhere in particular, but they quickly got themselves in trouble when flying it because they lacked the needed experience. After freaking out and gaining way to much altitude they got lost above the clouds for hours before they finally descended again. They where smart enough to have brought a navigational map but had no idea where they were. However there was a giant office building not to far away from them and luck had it that they drifted closely over the top. To their surprise they saw a bunch of workers that had sneaked on the roof to enjoy a cigarette in secrecy and to have a safe space for exchanging how they truly feel about their boss, Tim Cook. Or how they liked to call him: Attila the nun of a sob story.

"Hey, where are we?", one of the duo shouted down.

"In a hot air balloon", came the snarky answer.

"Fuck you!" was the reply! "I will park this thing in your ass if you don't tell us where we are, right now!"

"Alright alright, calm your tits balloon guy. You are in Cupertino, this is the Apple building"

"How romantic, do you got any free iPads you can throw up in to the basket?"

"iPhones have less drag when you throw them, you know, you should try it."

"WE DON'T THROW PRODUCTS AT CUSTOMERS ANYMORE AT APPLE."

"Okay but can you then maybe ask Steve Jobs to sign my phone?"

"Did he die because somebody threw an iPad at him?"

This was of course the perfect moment for Terry to finally show his head over the edge of the basket and join the conversation, while looking at his friend he said:

"Apple keeps doctors away, Eric, that probably did not help either."

The Apple Engineer was now completely loosing it and you would too if you had work at Apple since 1977 and are trying to find some comfort in nicotine and fresh air and sunshine and suddenly you hear a voice coming from heaven and for a fraction of a second you think about life after Steve Jobs. "Hey where are we?" is a very scary thing to hear coming from heaven as an Apple engineer post-Jobs. Especially when you used to work on Apple maps.

"WE SURE AS HELL KEEP JOBNUTS AWAY SO FLY AWAY NOW OR WE WILL CALL THE FEDS AND DON'T HIT ANY POWER LINES, OUR MANAGERS THINK WE ARE COMPILING."

"That made no sense but okay and just so you know we where just trying to brighten up your day, so please don't call the FAA." --pulls burner--

And so with a smile on his face, because he finished that amazing exchange with a great rhyme and a world class pun, Eric idled up and they quickly gained altitude again. They took some time studying their map and after the wind picked up they concluded they where slowly drifting in the right direction, whatever that was. This satisfied them but both of them where a bit annoyed that neither had brought any cigarettes, would have been fun to try to use the burner to light them up and in California everything already causes cancer anyways.

"It just sucks to be an Apple engineer. You never get any credit for good work, just crap when it does not work like how the grown ups want it to work."

"Oh I worked in a garage in Campbell for a while and a wiffie, had a lot of customers that worked in garages too. See the current problem with Apple is that they have a tendency now to fill up their products with unnecessary gimbits and take away from that what has always worked great"

"I was going to say Judaism."

"People will still read it, won't they?"

"Don't ask me man, I am just a stranger in a hot air balloon trying to make his way back home and nobody calls me on the phone, not even Carly Rae Jepsen more like never baby."

"She is Canadian, it's long distance for her. But you are no stranger to me, Eric, if you know what I mean wink wink nudge nudge. And that nobody calls you on the phone is probably because of the implications and because there is not to much cell phone reception at 5000 feet."

"And you always forget to charge it."

'Anyway, so there is no punchline in this story?"

"Nope just a bunch of people that today finally lost their orientation, including me. Anybody want a beer?"

And so they sailed of in to new adventures, none the wiser but it killed some time. Alright I am done compiling. Back to work. Time to find out how many problems I have now. This is actually a coming out story. I am finally ready to let the world know I prefer emacs over vim. But you can't be straightforward about that in Silicon Valley. You have to use euphemistic language. 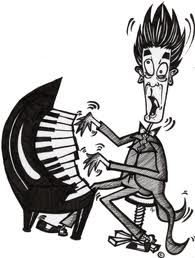